Guerrilla Filmmaking: Learn How to Make a Short Film

To make sure that we score courses properly, we pay a lot of attention to the reviews students leave on courses and how many students are taking a course in the first place. This course has a total of 4207 students which left 85 reviews at an average rating of 3.85, which is average.

We analyze course length to see if courses cover all important aspects of a topic, taking into account how long the course is compared to the category average. This course has a length of 9 hours 34 minutes, which is pretty short. This might not be a bad thing, but we've found that longer courses are often more detailed & comprehensive. The average course length for this entire category is 3 hours 13 minutes.

This course currently has a bestcourses score of 5.2/10, which makes it an average course. Overall, there are probably better courses available for this topic on our platform.

Before you read what I have to say, see what my students are saying about my course:

This is an insightful and refreshing revelation of what it takes to produce a short. What a rich learning experience. Thank you. - Randy Hendricks

I think this course was fantastic and is great reference material and informative for new and old filmmaker a alike. - Kolton Caltrider

Are you ready to make your indie film a success and learn from someone who's still works in the film business and has ACTUALLY made successful films?

Film School Hacks is a course that takes you into REAL WORLD CASE STUDIES on how THREE AWARD WINNING FILM were shot, marketed and distributed. They DON'T teach you this in Film School!

Save TIME and MONEY by learning from professionals who have gone through the filmmaking process. You'll learn NEW SKILLS that they don't teach you in film school.

This isn't a classroom lecture. This course is in the field. You are actually on set watching and learning for film pros with credits like:

As a director I alway try to work with high end professionals so I can continue to learn from pros in each discipline, and now you can too. I have over 20 years in the film business and have worked on and delivered over 1000 professional feature films, short film, commercials, music videos, network promos, documentaries and digital content.

Here's a bit about me and Filmmaking and Video Production Hacks:

This course houses a collection of short films by international award winning writer/director Alex Ferrari, founder of Indie Film Hustle. He exploded onto the indie film scene with his break-through film BROKEN.

Shot on a budget of just $8000 and boasting over 100 visual FX shots, BROKEN became an instant indie film classic. He went on to sell over to $90,000 in DVDs by self distributing BROKEN.

These films have screened in over 600 international film festivals and have won countless awards around the world. I also share you you my 6 Secrets to get into Film Festival Cheap or FREE!

"BROKEN is essentially a demonstration of the mastery of horror imagery and techniques...effective and professional." - Roger Ebert (Chicago SunTimes)

Included in this collection is almost 9 hours (and growing) of a guerrilla indie film school (over 50 videos). Film School Hacks goes through pre-production, production, post production and what to do after your done shooting your indie film. The Ultimate Indie Filmmaker's Course.

Also interviews, behind the scenes, and much more.

Important information before you enroll:

Enroll NOW and turn your filmmaking dream into a reality! Let's get started! 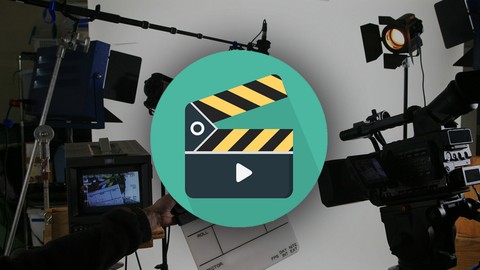