To make sure that we score courses properly, we pay a lot of attention to the reviews students leave on courses and how many students are taking a course in the first place. This course has a total of 632 students which left 39 reviews at an average rating of 4.38, which is average.

We analyze course length to see if courses cover all important aspects of a topic, taking into account how long the course is compared to the category average. This course has a length of 5 hours 40 minutes, which is pretty short. This might not be a bad thing, but we've found that longer courses are often more detailed & comprehensive. The average course length for this entire category is 5 hours 59 minutes.

This course currently has a bestcourses score of 5.1/10, which makes it an average course. Overall, there are probably better courses available for this topic on our platform.

The course is ALL SLIDES-BASED: No hands-on will be done during this course. This is a complete course that explains how the Cloud Design Patterns in depth.

Each pattern describes the problem that the pattern addresses, considerations for applying the pattern, and an example based on Microsoft Azure. Most of the patterns include code samples or snippets that show how to implement the pattern on Azure. However, most of the patterns are relevant to any distributed system, whether hosted on Azure or on other cloud platforms.

Anti-Corruption Layer Pattern: Implement a façade or adapter layer between a modern application and a legacy system.

Bulkhead Pattern: Isolate elements of an application into pools so that if one fails, the others will continue to function.

Cache-Aside Pattern: Load data on demand into a cache from a data store.

Choreography Pattern: Let each service decide when and how a business operation is processed, instead of depending on a central orchestrator.

Claim Check Pattern: Split a large message into a claim check and a payload to avoid overwhelming a message bus.

Compensating Transaction Pattern: Undo the work performed by a series of steps, which together define an eventually consistent operation.

Gatekeeper Pattern: Protect applications and services by using a dedicated host instance that acts as a broker between clients and the application or service, validates and sanitizes requests, and passes requests and data between them.

Gateway Aggregation: Use a gateway to aggregate multiple individual requests into a single request.

Geodes Pattern: Deploy backend services into a set of geographical nodes, each of which can service any client request in any region.

Priority Queue Pattern: Prioritize requests sent to services so that requests with a higher priority are received and processed more quickly than those with a lower priority.

Publisher/Subscriber Pattern: Enable an application to announce events to multiple interested consumers asynchronously, without coupling the senders to the receivers.

Queue-Based Load Leveling Pattern: Use a queue that acts as a buffer between a task and a service that it invokes in order to smooth intermittent heavy loads.

Retry Pattern: Enable an application to handle anticipated, temporary failures when it tries to connect to a service or network resource by transparently retrying an operation that's previously failed.

Sequential Convoy Pattern: Process a set of related messages in a defined order, without blocking processing of other groups of messages.

Sidecar Pattern: Deploy components of an application into a separate process or container to provide isolation and encapsulation.

Static Content Hosting Pattern: Deploy static content to a cloud-based storage service that can deliver them directly to the client.

Throttling Pattern: Control the consumption of resources used by an instance of an application, an individual tenant, or an entire service.

Valet Key Pattern: Use a token or key that provides clients with restricted direct access to a specific resource or service. Data Management, and Security. 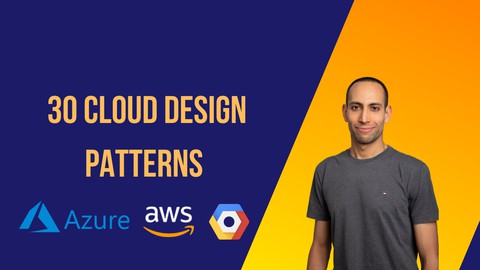