Working with Binary Data in Python 3

Learn to read, write, manipulate and operate on bits and bytes

To make sure that we score courses properly, we pay a lot of attention to the reviews students leave on courses and how many students are taking a course in the first place. This course has a total of 154 students which left 45 reviews at an average rating of 4.8, which is average.

We analyze course length to see if courses cover all important aspects of a topic, taking into account how long the course is compared to the category average. This course has a length of 1 hours 42 minutes, which is pretty short. This might not be a bad thing, but we've found that longer courses are often more detailed & comprehensive. The average course length for this entire category is 4 hours 58 minutes.

This course currently has a bestcourses score of 5.4/10, which makes it an average course. Overall, there are probably better courses available for this topic on our platform.

Knowing how to manipulate binary data at and byte streams is an essential skill for any type of programming you do with Python from web developers to data scientists to game developers to security analysts and engineers, malware reverse engineers, and penetration testers

Some of the things you will learn include: 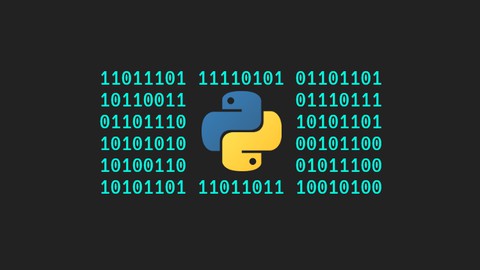