An Empire Across Three Continents – Europe, Asia and Africa was known as Roman Empire

To make sure that we score courses properly, we pay a lot of attention to the reviews students leave on courses and how many students are taking a course in the first place. This course has a total of 2 students which left 1 reviews at an average rating of 5, which is below the average.

We analyze course length to see if courses cover all important aspects of a topic, taking into account how long the course is compared to the category average. This course has a length of 4 hours 1 minutes, which is pretty short. This might not be a bad thing, but we've found that longer courses are often more detailed & comprehensive. The average course length for this entire category is 3 hours 26 minutes.

This course currently has a bestcourses score of 4.7/10, which makes it an average course. Overall, there are probably better courses available for this topic on our platform.

An Empire Across Three Continents – Europe, Asia and Africa was known as Roman Empire. The boundaries of the empire were formed by two great rivers, the Rhine and the Danube from North Side. To the South, The boundaries are covered by the huge expanse of desert called the Sahara. In the east, river Euphrates and to the West Atlantic Ocean. This vast stretch of territory was known as Roman Empire. That is why Roman Empire is called an Empire across Three Continents. The Mediterranean Sea is called the heart of Rome’s empire.

Small but well-organised military forces of the central Italian citystate of Rome took advantage of the political discord that followed the disintegration of Alexander’s empire and established control over North Africa and the eastern Mediterranean from the second century BCE.

At the time, Rome was a republic. Government was based on a complex system of election, but its political institutions gave some importance to birth and wealth and society benefited from slavery. The forces of Rome established a network for trade between the states that had once been part of Alexander’s empire. In the middle of the first century BCE, under Julius Caesar, a high-born military commander, this ‘Roman Empire’ was extended to present-day Britain and Germany. Latin (spoken in Rome) was the main language of the empire, though many in the east continued to use Greek, and the Romans had a great respect for Hellenic culture. There were changes in the political structure of the empire from the late first century BCE, and it was substantially Christianised after the emperor Constantine became a Christian in the fourth century CE. To make government easier, the Roman Empire was divided into eastern and western halves in the fourth century CE. But in the west, there was a breakdown of the arrangements that existed between Rome and the tribes in frontier areas (Goths, Visigoths, Vandals and others). These arrangements dealt with trade, military recruitment and settlement, and the tribes increasingly attacked the Roman administration. Conflicts increased in scale, and coincided with internal dissensions in the empire, leading to the collapse of the empire in the west by the fifth century CE. Tribes established their own kingdoms within the former empire, though, with the prompting of the Christian Church, a Holy Roman Empire was formed from some of these kingdoms from the ninth century CE. This claimed some continuity with the Roman Empire. 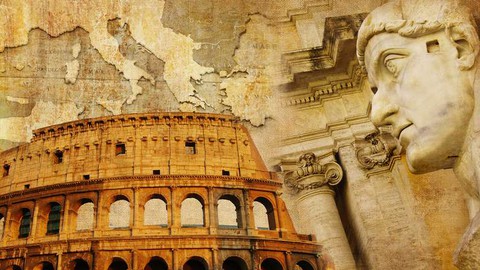