To make sure that we score courses properly, we pay a lot of attention to the reviews students leave on courses and how many students are taking a course in the first place. This course has a total of 379 students which left 26 reviews at an average rating of 4.96, which is average.

We analyze course length to see if courses cover all important aspects of a topic, taking into account how long the course is compared to the category average. This course has a length of 26 hours 12 minutes, which is pretty short. This might not be a bad thing, but we've found that longer courses are often more detailed & comprehensive. The average course length for this entire category is 9 hours 52 minutes.

This course currently has a bestcourses score of 5.7/10, which makes it an average course. Overall, there are probably better courses available for this topic on our platform.

→ Become An iOS Professional With Swift In One Course

Create a new Swift iOS Xcode project and mould it into an AppStore-quality iOS app! Our '123 Calc' iOS app is available on AppStore now. Just search for ‘123 Calc’ and download it to see what you’ll B building with iOSBFree - an easy way to an iOS Swift Career building professional Xcode apps.

→ LEARN FROM ONE OF THE 1st iOS DEVELOPERS IN THE WORLD

Our instructor Matt, has 13 years of iOS experience and created the world's first iPhone, iPad and Apple Watch apps. Now, he dedicates his time to recording iOS & Swift courses for iOSBFree (pronounced "iOS Be Free").

→ In This iOS Swift Course

1. We introduce the concept of structuring your iOS Swift Xcode project to a professional level. Our Xcode project will adhere to an industry-grade standard (You wont find this anywhere else on Udemy!)

2. We teach how (and why) to layer your project into separate layers, known as layered architecture and is a mandatory coding practice for any iOS development job role.

3. We teach 'The 6 Coding Principles' used within the iOS industry, which any serious iOS developer MUST LEARN.

5. Taught by one of the most experienced iOS developers in the world.

✔️ Structure Xcode project files (e.g. classes & structs) to an iOS industry-level standard
✔️ Organise the Xcode project to an iOS industry-level standard
✔️ Structure iOS code using layered architecture (a MUST in the industry)
✔️ Create an iOS app in Swift within Xcode
✔️ Create an iOS AppStore-quality mobile app (ours is available on the AppStore now)
✔️ To separate behaviours into independent .Swift files (e.g. classes & structs)
✔️ Learn 'The 6 Coding Principles' every iOS developer MUST understand to reach the top of their iOS career
✔️ Learn to think as an iOS engineer and not just a coder!

→ What Is An iOS Industry Standard?

→ This iOS & Swift Course Is Paid

This iOS & Swift course is paid for and helps us create more FREE content for our iOS students. We also supply FREE iOS career-building Career Guides on our website. FREE editable CV Templates used to earn 6 figures. FREE online iOS articles discussing the iOS industry and FREE online Swift courses providing unparalleled  foundational knowledge you wont find anywhere else. By purchasing this iOS & Swift masterclass course you are helping others learn iOS too.
❤️❤️❤️❤️
Thank you so much for your support.

We are a unique iOS career-building service sharing over 14 years of successful experience shaping the mobile-app and iOS industry into what it is today. Our unique information, point-of-view and service can be utilised to build highly successful and profitable careers in iOS.

iOS developers are the most sought after developers in the world! They can earn over £100,000 per year, work remotely and B in high demand for their mobile app skills! Subscribe to our YouTube channel and let us reveal all of our insider secrets completely for free.

Please show your support by enrolling in our course!

Check out our Instructor profile (just briefly) and glance over Matt's incredible unparalleled iOS experience. After 14 years of specialising in iOS (and only iOS), he created a company helping people build their own successful and profitable careers in iOS too.

Our unique information cannot be found anywhere else on any platform. We teach code, syntax and architecture but also provide tried & tested strategies to BOOST your iOS mobile app career forwards and build a better future!

Please send us an email with the mobile app related topic you'd like to learn and we'll happily record, edit and publish it for you. Absolutely for free. Simply email community@iOSBFree.com with the subject heading, "iOS Topic I Want To Learn".

→ First In The World

Not only is our instructor one of the first iOS developers in the world, but our service is also the first of its kind in the world!
iOSBFree is a truly unique one-of-a-kind service. There is no single other service offering Matt’s level of experience in any other coding course, software engineering tutorial, or career-building service anywhere in the world. 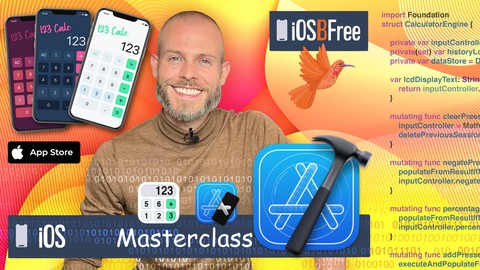