Microsoft PowerPoint From Beginner to Advanced

To make sure that we score courses properly, we pay a lot of attention to the reviews students leave on courses and how many students are taking a course in the first place. This course has a total of 45581 students which left 7437 reviews at an average rating of 4.65. Impressive!

We analyze course length to see if courses cover all important aspects of a topic, taking into account how long the course is compared to the category average. This course has a length of 6 hours 47 minutes, which is pretty short. This might not be a bad thing, but we've found that longer courses are often more detailed & comprehensive. The average course length for this entire category is 5 hours 28 minutes.

This course currently has a bestcourses score of 8.9/10, which makes it a great course to learn from. On our entire platform, only 15% of courses achieve this rating!

Enroll now to go from beginning PowerPoint user to Advanced user. This course will take you through a comprehensive understanding of the most popular presentation tool on the market. As your instructor I will use my 20+ years of Microsoft Office training to guide you step by step as you further develop your skills in Microsoft PowerPoint. Even if you're a seasoned PowerPoint user you'll be amazed at the techniques and tools you'll pick up to help you become more productive and efficient in PowerPoint.

At completion of this course you will have mastered the most popular and sought after Microsoft PowerPoint tools and come away with confidence to complete many PowerPoint tasks with efficiency and grace. Below are just a few of the topics you will master:

So, what are you waiting for, enroll now and take the next step in mastering Microsoft PowerPoint and go from PowerPoint Newb to PowerPoint Guru! 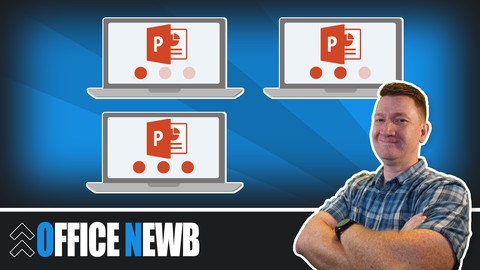