To make sure that we score courses properly, we pay a lot of attention to the reviews students leave on courses and how many students are taking a course in the first place. This course has a total of 361 students which left 46 reviews at an average rating of 4.95, which is average.

We analyze course length to see if courses cover all important aspects of a topic, taking into account how long the course is compared to the category average. This course has a length of 2 hours 10 minutes, which is pretty short. This might not be a bad thing, but we've found that longer courses are often more detailed & comprehensive. The average course length for this entire category is 2 hours 13 minutes.

This course currently has a bestcourses score of 6.0/10, which makes it an average course. Overall, there are probably better courses available for this topic on our platform.

The Nunchaku or Nunchucks is a traditional martial arts weapon consisting of two sticks connected at one end by a short chain or rope.

The nunchaku is most widely used in martial arts as a training weapon, since it allows the development of quicker mind / body coordination and teaches 3 dimensional movements and patterns that also appear in unarmed Kung Fu combinations.

The two sections of the weapon are commonly made out of wood, while the link is a cord or a metal chain. Modern-day nunchaku can be made from metal, plastic or fiberglass and bear in mind that possession of them is illegal in some countries, except for use in martial arts schools. Foam or plastic Nunchucks are generally available for safer training and we indeed recommend that you learn with them.

The exact origin of nunchaku is unclear, it is often suggested that they were adapted by Okinawan farmers from a non-weapon rice-flail implement for threshing rice. It is very common that a farming community, who are under military dictatorship and forbidden from carrying weapons, will adapt their agricultural hand tools to use as weapons.

Though I’m told there are police officers who use nunchucks instead of side-handled batons, it is unlikely that you will have need of these skills to defend yourself in a real confrontation. That shouldn’t stop you from learning and enjoying these skills. Nunchucks are simply fun in the way that people enjoy juggling, but the improved coordination and neurological patterns developed will undoubtedly overflow to your other martial arts practice and other areas of life.

In this program you will learn three forms (a form is a choreographed set of moves that enable you learn the most useful techniques within the context of other techniques).

The first form you will learn is for a single Nunchucks.

The second and third forms are for double Nunchucks.

Each form is short enough to be remembered (this is martial arts, not memory training), and should be practiced until it can be done without thinking. Indeed, when you get to the 3rd and most advanced form, each hand will be doing different things and can only be done when each movement is learned at an unconscious level.

The program is set out for you to train every day using several short videos. Adding to your skills in easy to follow steps, you will build superb skills that will become second nature.

It is tempting to rush ahead, but you will find that to learn these skills thoroughly, it is best that you master each part as you go even if that means repeating the same day several times. Excellence takes patience and determination. Remember “Kung Fu” means “mastery through discipline.” 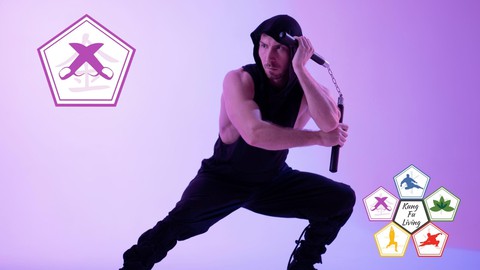