Songs for Spanish and Classical Guitar

To make sure that we score courses properly, we pay a lot of attention to the reviews students leave on courses and how many students are taking a course in the first place. This course has a total of 121 students which left 7 reviews at an average rating of 4.79, which is average.

We analyze course length to see if courses cover all important aspects of a topic, taking into account how long the course is compared to the category average. This course has a length of 2 hours 55 minutes, which is pretty short. This might not be a bad thing, but we've found that longer courses are often more detailed & comprehensive. The average course length for this entire category is 3 hours 7 minutes.

This course currently has a bestcourses score of 5.2/10, which makes it an average course. Overall, there are probably better courses available for this topic on our platform.

Are you a guitarist who wants to improve your repertoire, or are you just starting out and looking for some songs to learn? Do you like improvising against backing tracks with the help of chord charts and scale maps? Songs for Spanish and Classical Guitar offers 17 guitar technique exercises and 25 songs to learn in the form of a book and video lessons. The songs are at different levels, although this aimed for an intermediate guitarist, you can learn many of the songs as a beginner, and you can learn how to read TAB and rhythm from the beginning of the course.

And.. How can you learn it?

Lastly... What are the songs?

What is included with each of the lessons?

This course is a result of a successful KickStarter campaign in the end of 2020, where 300 people supported the project. In addition all the audio files are recorded in a studio with professional quality, as well as the videos made by cinematographers so you have the best experience learning the songs.

Start or continue your guitar journey with Songs for Spanish and Classical Guitar! 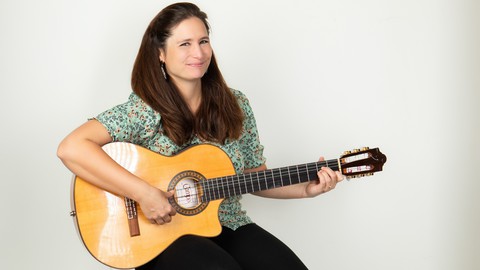