To make sure that we score courses properly, we pay a lot of attention to the reviews students leave on courses and how many students are taking a course in the first place. This course has a total of 6041 students which left 20 reviews at an average rating of 4.3, which is average.

We analyze course length to see if courses cover all important aspects of a topic, taking into account how long the course is compared to the category average. This course has a length of 39 minutes, which is pretty short. This might not be a bad thing, but we've found that longer courses are often more detailed & comprehensive. The average course length for this entire category is 9 hours 9 minutes.

This course currently has a bestcourses score of 5.9/10, which makes it an average course. Overall, there are probably better courses available for this topic on our platform.

This course teaches you how to make the 2d game snake with Python. You will learn to use the module pygame. pygame is a Python game development library designed for use with the The Python programming language. pygame is designed to provide low level access to audio, keyboard, mouse, joystick, and graphics as well as high level modules for tasks such as video playback.

The snake game is the most classic and influential arcade game in the video game universe, It is a video game classic that has been played by many players since its inception. It used to be on an arcade machine but these days is available even in phones.

pygame is a set of Python bindings for the SDL multimedia library. It works with a variety of operating systems and hardware platforms, including Linux with Raspberry Pi, Microsoft Windows, Apple Mac OS X, BeOS, FreeBSD, OpenBSD, Sharp Zaurus, iPAQ, HTC Dream phone and even Android.

Upon completing this course you'll be able to make your own 2d games, have a working snake game and have basic game development skills. All source code is included with this course. 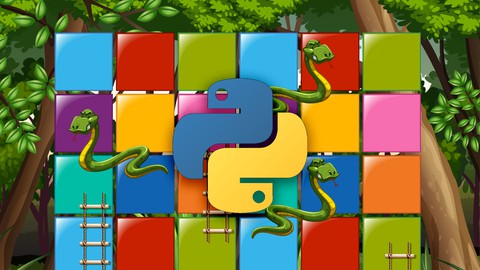