To make sure that we score courses properly, we pay a lot of attention to the reviews students leave on courses and how many students are taking a course in the first place. This course has a total of 40893 students which left 7322 reviews at an average rating of 4.73. Impressive!

We analyze course length to see if courses cover all important aspects of a topic, taking into account how long the course is compared to the category average. This course has a length of 10 hours 6 minutes, which is pretty short. This might not be a bad thing, but we've found that longer courses are often more detailed & comprehensive. The average course length for this entire category is 9 hours 9 minutes.

This course currently has a bestcourses score of 9.0/10, which makes it a great course to learn from. On our entire platform, only 15% of courses achieve this rating!

Learn game development with Unreal Engine 5. UE5 is the industry-leading 3D game design software that the professionals use to create today’s top games. Start your journey towards getting paid to make video games today!

Begin your game development career with possibly the most up-to-date game dev course on the internet - Unreal Engine 5: The Complete Beginner's Course. Every lecture in this course was filmed using the full version of Unreal Engine 5, released in April 2022.

When I began trying to learn Unreal Engine, I found a lot of information, but it was unstructured and lacked detail. So I created this course to provide what others lacked - structure and detail. The course is laid out very carefully so that you can go into it knowing absolutely nothing, and then, little by little, each lecture builds upon the previous lectures, so that every time you learn something new, you already have all the knowledge you need to learn that new thing without any confusion.

Unlike other courses, it covers the fundamentals in detail, so by the end you should have a thorough understanding of all the basics of Unreal Engine and be fully prepared to move on to more intermediate topics. Depending on your goals, this might not be for you. This course was designed for those who want to learn as much about Unreal Engine 5 as possible. If you’re just looking to have a bit of fun and to tinker around a little bit, then this might not be the right course for you. But, if you’re interested in getting really good, possibly becoming an indie developer or even working for a major studio, then I strongly believe that this is the best course for you to start with. This course will teach you the knowledge that normally falls through the cracks.

At the end of each section, there are a series of tutorial videos that provide an opportunity to apply the concepts learned in that section. These tutorials will walk you through the process of making a working game, from start-to-finish, step-by-step.

This course covers the fundamentals that other courses skip, causing you to get confused as you try to learn more advanced topics. The course will cover the following topics in thorough detail:

For years, the Unreal Engine was only affordable for large companies, but now, Unreal Engine 5 is completely free to use, as long as you agree to pay Epic Games 5% of your game sales over $1 million.

In this course, you will learn the fundamentals of game development using the Unreal Engine 5 through a series of 62 lectures and 15 tutorials. By the end of the course, you will have built an entire demo game from scratch.

The course will start from scratch and programming knowledge is not required, so anyone with basic computer skills can jump in and begin their Unreal Engine 5 training! For those who learn better with closed captions, 100% of the captions are human transcribed, not auto-generated.

Upon completion of the course, you will have the skills necessary to translate ideas for games into playable games that use environments you sculpt and logic that you define, and you will understand how to make a game in Unreal Engine 5. 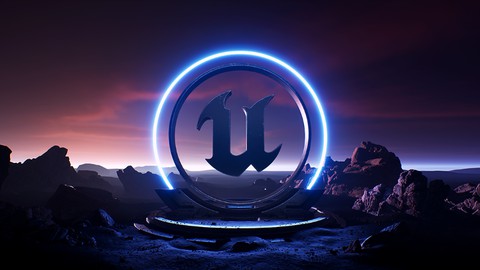