An Introduction To Video Game Production

To make sure that we score courses properly, we pay a lot of attention to the reviews students leave on courses and how many students are taking a course in the first place. This course has a total of 11914 students which left 532 reviews at an average rating of 4.51. Impressive!

We analyze course length to see if courses cover all important aspects of a topic, taking into account how long the course is compared to the category average. This course has a length of 3 hours 42 minutes, which is pretty short. This might not be a bad thing, but we've found that longer courses are often more detailed & comprehensive. The average course length for this entire category is 9 hours 9 minutes.

This course currently has a bestcourses score of 7.9/10, which makes it a great course to learn from. On our entire platform, only 15% of courses achieve this rating!

A complete introduction to how video games are produced from what a game producer does everyday to how to build and maintain a backlog, how marketing affects your production plans to the ethics of being a producer, and a whole bunch more.

This course is set up for anyone interested in how video games are produced, from fresh producers to game design and production students and indeed anyone who just wants to have a look behind the curtain of video game production.

In the course we go through a set of lectures covering all areas of game production, complete with exercises you can try, and at the end we take what we've learned and run through an example project, which can act as a proxy for your own game.

By the end of the course you should be equipped to plan and produce your own video game in a conscientious way, aware of and now able to avoid all the pitfalls and problems most teams have to experience for themselves.

You get lifetime access to this course for one fee, and the instructor is an experienced games industry producer who's worked on some of the biggest games ever released (like GTA V & Cyberpunk 2077) and wants to share the knowledge they've gained so you can make your own projects in a safer, less risky way.

What this course ISN'T: 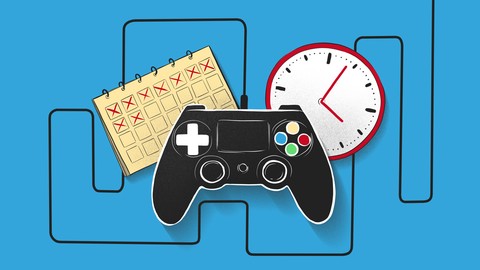