To make sure that we score courses properly, we pay a lot of attention to the reviews students leave on courses and how many students are taking a course in the first place. This course has a total of 34 students which left 2 reviews at an average rating of 5, which is below the average.

We analyze course length to see if courses cover all important aspects of a topic, taking into account how long the course is compared to the category average. This course has a length of 7 hours 21 minutes, which is pretty short. This might not be a bad thing, but we've found that longer courses are often more detailed & comprehensive. The average course length for this entire category is 9 hours 9 minutes.

This course currently has a bestcourses score of 4.9/10, which makes it an average course. Overall, there are probably better courses available for this topic on our platform.

In this course you will learn and make 3d tps third person shooter game using unity 3d game engine for the android smart phones and iphones. Third-person shooter ( TPS) is a subgenre of 3D shooter games in which the gameplay consists primarily of shooting. It is closely related to first-person shooters, but with the player character visible on-screen during play.

Unity is a cross-platform game engine developed by Unity Technologies, first announced and released in June 2005 at Apple Inc.'s Worldwide Developers Conference as a Mac OS X-exclusive game engine. The engine has since been gradually extended to support a variety of desktop, mobile, console and virtual reality platforms. It is particularly popular for iOS and Android mobile game development. Unity is so much more than the world’s best real-time development platform – it’s also a robust ecosystem designed to enable your success.

Games are produced through the software development process. Games are developed as a creative outlet and to generate profit. Game making is considered both art and science. Development is normally funded by a publisher. Well-made games bring profit more readily.

The 7 steps to creating a mobile game are: Make your plan. Choose your software. Learn your programming language. Start your project. Implement your graphics. Elevate your play. Release your game. Every person these days has a mobile phone, so it’s no surprise the mobile game market has skyrocketed. 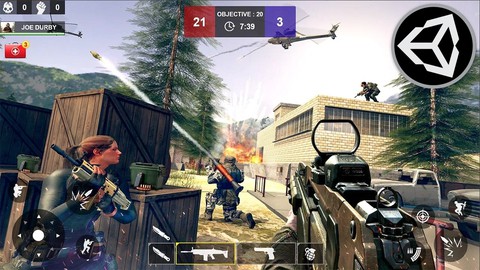