Using Unity 3D & Fungus, we will create, jigsaw puzzles, Specific find games & a catch game all without write any code.

To make sure that we score courses properly, we pay a lot of attention to the reviews students leave on courses and how many students are taking a course in the first place. This course has a total of 532 students which left 69 reviews at an average rating of 4.55, which is average.

We analyze course length to see if courses cover all important aspects of a topic, taking into account how long the course is compared to the category average. This course has a length of 7 hours 20 minutes, which is pretty short. This might not be a bad thing, but we've found that longer courses are often more detailed & comprehensive. The average course length for this entire category is 8 hours 22 minutes.

This course currently has a bestcourses score of 5.3/10, which makes it an average course. Overall, there are probably better courses available for this topic on our platform.

This course is aimed at anyone who wants to make simple 2D puzzle games, but, who doesn’t know how to code.
Fungus is a free Unity 3D plugin that allows non coders (like me & a lot of you) access to some of Unity's core features.

If you have never used game development software, or if you have struggled with code trying to make games, Fungus and this course are exactly what you need.

Using a skeleton template supplied with the course we can build

Just so we get off on the right foot, THIS IS NOT A RE-SKINNING COURSE

The template works perfectly, but you will need to adapt it by adding your own graphics and sound effects to make your own game.

More importantly you can

So not only can you make multiple puzzles with this course you can use it to add puzzles to your existing Fungus narrative games. Sounds good to me.

So whats keeping you? Make puzzle games & you get to improve you narrative games as well? who doesn't want this course. 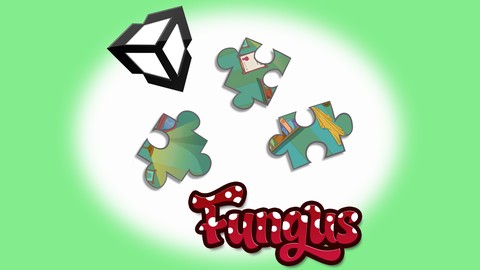